Death and the Harlot – Georgina Clarke (by Mrs Y) 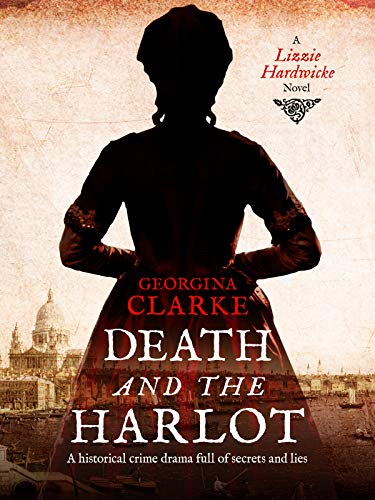 The year is 1759 and London is shrouded in a cloak of fear. With the constables at the mercy of highwaymen, it’s a perilous time to work the already dangerous streets of Soho. Lizzie Hardwicke makes her living as a prostitute, somewhat protected from the fray as one of Mrs Farley’s girls. But then one of her wealthy customers is found brutally murdered… and Lizzie was the last person to see him alive.

Constable William Davenport has no hard evidence against Lizzie but his presence and questions make life increasingly difficult. Desperate to be rid of him and prove her innocence Lizzie turns amateur detective, determined to find the true killer, whatever the cost.

Yet as the body count rises Lizzie realises that, just like her, everyone has a secret they will do almost anything to keep buried…

Thanks to a recommendation by a good friend on Goodreads, I picked up “Death and the Harlot” by Georgina Clarke, and I am so grateful for the suggestion. It’s one of the most fun kind of books to read, and it is very much not a children’s book. Don’t get me wrong, my friends, I do read a lot of Children’s literature, and I am not saying there is anything wrong with it. But sometimes momma needs some fun adult reading, and this book is perfect for it.

What I love right off of the bat with the story, was that even though the subject matter is very intense, the book never was raunchy. My first impression of the story was that it was taking the things that make the infamous tales of London of old so dark, and turning it into something that fits a modern sensibility without betraying the past.

Later in the novel toward the end, Georgina left a note and said that the people of that time cursed a blue streak. I thought the way she handled it was fantastic. It wasn’t sanitized filth, but it was made for a modern pallet toward the older style.

Let’s talk about some scoring here, and we are going to look into the “Cliche Much” part of my scoring. I found the character of Lizzy to be both compelling, realistic, and vulnerable in her circumstances, but at times, there is a cliche issue that crops up. And yet, there are things about her that could tend toward the cliche “Mary Sue.” If you are unfamiliar with this cliche, it usually comes with characters that are overly strong or have “chosen one” principals, or they miraculously manage to figure all the4 things out because of some ‘plot armor’ that isn’t well laid out. Lizzy at times suffers from this. For some reason, she’s always there miraculously when needed. She’s the one who knew about the McGuffin, she’s the one who was the last scene with the victim, she’s the one who had a secure connection to the antagonist and never considered them until the right moment. Let me state that though the cliche is there, it’s brilliantly used. It’s okay to use cliche’s in your novels if you balance them and use a new take. Lizzy makes up for the situations she encounters because of how well she is balanced. She’s not overly strong or overly brave, or able to withstand things that are above her mentally or physically. She’s just lucky, or maybe very unlucky, to find herself in the center of chaos.

The next piece I wanted to talk about was the “Whole Story” portion of my scoring. This is a small nitpick, but I felt it was a tad of an issue for me. 99.5% of the book is solidly well done, and all plot lines and threads make sense, and end well. However, there is an Uncle character that is mentioned to be part of an origin story, who is brought up by even a mentor type of character. This Uncle character appears to be the main antagonist of the world, and yet, he’s barely mentioned. The end of the book does not settle his storyline with the character. That tiny bit made the story unfinished for me. I, however, feel that the idea behind the not solidifying the way the character feels about the uncle, or finalizing it, is because it will be addressed in books coming later. This isn’t bad at all, and it is what will likely make for a better story later. I just found that it wasn’t tied up as well as other plot-lines in the same story were.

Under the “Story Structure, Foundation and Presentation” portion of my scoring, this book looks, reads and is a wonderful novel. I found no grammatical or spelling errors. I found no issues with the Kindle version on default settings. Everything is margined perfectly, the font looks lovely, the lines are crisp and clean, the book is well p[lotted and loads of wonderful tension bits, and more importantly, the mystery was written with perfect pacing. That is a tall order, my friends. This category tends to be the one that I hit most other books on the hardest, and Georgina’s team helped her achieve a nearly perfect book on all fronts. I do hope they all went out to dinner to celebrate, because this is quite an achievement, in my opinion.

In critiquing the pacing of the mystery, clues and using my mystery journal, “Death and the Harlot” has fun with the mystery tropes that make mysteries exciting. There are clues everywhere, and they fall in both fast-paced, but well-placed sections. There are some slower burning ones, the red herrings are well done, and my favorite parts have to do with buttons.

Focusing on the next part, the character structure and people in this world are all written well. From the Ma character to Sallie, to even the Tavern owners, this book has a lot of realism in the figures. They all fit in this world, and also the vendors and non-important background characters add color to the scenario. I truly enjoyed reading all of this, and I loved picking up the clues. I will say that of all the mysteries I’ve read in the last year, this one for me was the best type. It felt like it was written for me and my humor and my preferences so that I could feel like I was there in days long forgotten in circumstances no one wanted to endure.

With everything in mind, I’m scoring “Death and the Harlot” by Georgina Clarke a 98/100 which is a nearly perfect score, and five stars on Amazon and Goodreads. If you like mysteries with adult themes, pick this up, and if you like merry old London, this is worth reading as well. See you next week, my friends.