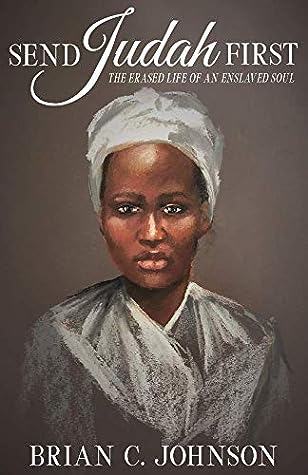 A young girl’s life is shattered when she is stolen from her African village in a midnight raid. Ruthlessly torn from her family to be beaten, chained, degraded, and enslaved in a heartless world she can barely comprehend. The slave ledger at Virginia’s Belle Grove Plantation only reveals that Judah was purchased to be the cook, gave birth to 12 children, and died in April 1836. But, like the other 276 faceless names entered in that ledger, Judah lived. Brian C. Johnson’s important work of historical fiction goes beyond what is recorded to portray the depth, humanity, and vulnerability of a beautiful soul all but erased by history. For Judah, as Johnson notes, “did the ultimate—she survived. Not as a weakling, but resilient and determined.”

Sometimes Netgalley sends me emails to tempt me to read or listen to something. I have to thank them for this recommendation. I am so happy that I got a chance to pick up “Send Judah First” by Brian C. Johnson. It is one of these stories that everyone should read. It’s the story of an erased life. Judah’s story is both fictionalized and confirmed, a mix of authentic and embellished, but it’s all factually based in history. I picked this up on NetGalley, but if you are interested in listening to a copy for yourself, you can purchase it on Audible.

For a summary, this is Judah’s story, and she was a young African girl of 13 who lived on the Ivory Coast. One terrible night, Judah was taken and sold into slavery in the 1800s. As readers are taken with her from the African coast, through her torments, the horrible ugly truth of slavery, learning English, having a new religion forced upon her, and all of the brutal nature of her entire life, and to the end. We are there when she suffers, we are there when she feels triumph, and most of all, we are witnesses to her life.

To start this review, let’s go into the critiques. I found it difficult to find any flaws in this story, but there are some pacing issues in the narrative. Sometimes the story builds to a crescendo in a scene that has taken to its emotional wall. It’s usually impactful and drives home a point or theme to the chapter. A sentence later, the story moves forward in time, sometimes weeks or months, or even in a case of a year. It’s clunky at times, but this is the biggest flaw I found.

The only other critique I had was with the ending. I never got any closure to Judah’s life. Now that likely has to do with the reality of her life. But every story needs an ending, and this one was abrupt and unexplained until we got to the Author’s notes at the end, which explained the context of the story. In which case, I have never considered the Author’s notes to be part of a story. They are just notes. They have nothing to do with the beginning, middle, and ending of the story. Without this Author’s note, though, I wouldn’t have understood what the context was to the ending as it was presented.

Now let’s go into what I enjoyed about “Send Judah First,” and I would like to start by reading to me as realistic even in parts the Author later admitted was fiction. This story is impactful regardless of fiction or non-fiction. The characters, both real and fictionalized, were realistic and had life and breath. The idea of this story is to be a biography of someone who never had one.

For the narration part, the narrator of this story is Elizabeth Isitor. She gives this uniqueness to the story all in and of herself. There is a lot of the Ivory Coast represented in words, but Miss Isitor brings such life to all of it that you can almost feel the ocean breeze. You can also feel the torments, pains, and sadness that Judah goes through, all because of how this story is delivered. I am humbled and honored to have heard the life that Judah had because of this wonderful narrator. Thank you, miss Isitor.

Also, fun fact, some recipes are in the story for the digital copies that you can purchase according to the Author’s Note, and I’m for one considering some of them in my house. I learned an interesting trick to biscuit making that I’m willing to try. There are some fantastic recipes told in the story, pork pie, peach cobbler, and all sorts of deliciousness. Even the red bean soup mentioned which I’m not sure which bean it is, but I feel like it might be a lintel, and I’m interested in learning more about it. The food sounded fantastic. The soul who cooked that food in the story was far more bright and wonderous than anything mentioned on a plate.

Gosh, I don’t mean to gush over a book, but I cannot help it. I don’t know if anyone who reads this can tell how much I loved this story, but I did. I barely could put it down. I must have cried at least a dozen times and smiled more at the good parts too. This story rendered me heartbroken at times and brought me kind moments at others.

Overall, I felt that “Send Judah First” is one of the best stories I’ve ever read, with a score of 92%, a 5 Star Review. The story of Judah goes on the Mrs. Y Recomends list, and I’m recommending it to anyone. “Send Judah First” is a powerful story and humbling, and I feel we all can learn a lot from it regardless of skin color or where we were born. We who are humans need reminders of humanity. This is a huge reminder, and I hope it becomes part of recommended reading the world over.