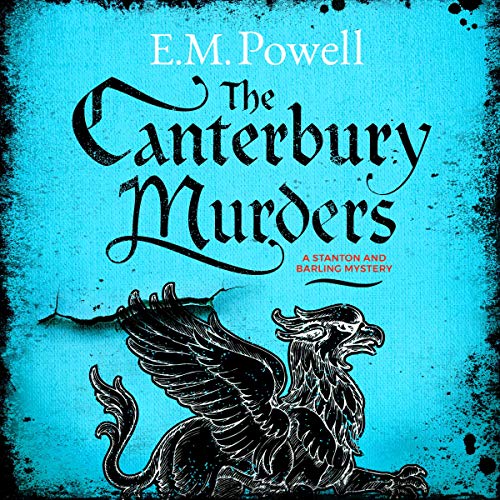 A fire-ravaged cathedral. An ungodly murder.

Easter, 1177. Canterbury Cathedral, home to the tomb of martyr Saint Thomas Becket, bears the wounds of a terrible fire. Benedict, prior of the great church, leads its rebuilding. But horror interrupts the work. One of the stonemasons is found viciously murdered, the dead man’s face disfigured by a shocking wound.

When King’s clerk Aelred Barling and his assistant, Hugo Stanton, arrive on pilgrimage to the tomb, the prior orders them to investigate the unholy crime.

But the killer soon claims another victim–and another. As turmoil embroils the congregation, the pair of sleuths face urgent pressure to find a connection between the killings.

With panic on the rise, can Barling and Stanton catch the culprit before evil prevails again—and stop it before it comes for them?

Happy Friday, my beautiful friends! I hope you all enjoyed your St. Patrick’s Day. Today I am going to review an Audiobook from one of my favorite authors. When I got my audible up and running, I was so excited to get my hands on this book, and I purchased it. No one had to ask me to listen to this because I loved the series’s previous two books. Today I am reviewing “The Canterbury Murders” by E.M Powell.

As I have changed my reviews a bit, we will start with critiques for a change. I had a couple of issues with the end of the book and how things tied up. Throughout the entire novel, there is a McGuffin ever looming. I cannot say what this thing is without giving spoilers, but it’s like a sword of Damocles that adds tension to the situation, making a countdown clock of sorts before it shows up. And this one thing is enormous. It adds to so many plots and subplots and previous situations in our two favorite protagonists’ lives.

Where I have the problem is, I guess the McGuffin wasn’t needed because it never showed up in the narrative. One of the characters said, “Oh, we are so glad that happened” or something to that effect, but never once do we see the McGuffin. It’s that whole “show don’t tell” thing that everyone goes on about writing circles. I don’t mind the tension the McGuffin gave because it was lovely. I do have an issue with how it fizzled out, though, and I was disappointed.

My following critique has to do with Barling. I love Barling as a character. He means a lot to me and my heart. He will always have a good place in my brain and soul for well-intentioned fuddy-duddy characters. It was explained that Barling is going through a thing emotionally, spiritually, and psychologically because of what happened at the end of the last book. That’s fine. We need the character growth of what that brings. I don’t understand the chemistry between him and Stanton during a period where we, the readers, were not given access because, again, it was told to us, not shown to us. How Barling could leave Stanton alone to heal is beyond me. I feel like he’s the kind of guy who would set up his tablets and things in the room while the people fixed him and not leave that job of comfort to another character introduced in this novel. Barling and Stanton have been through some stuff, three books worth of stuff. I don’t understand this part. In this case, my critique is that some jarring changes I felt didn’t fit necessarily with the rest of the story and the previous two stories before it.

Now, with that said, those are my critiques. They are nitpicking. To anyone who has ever seen the “Honest Trailer” for “Captain America: The Winter Soldier,” you may be familiar with this kind of nitpicking. It comes because this book is nearly perfect. I had to go in and look for something to critique. That’s so refreshing to me, and that’s why I’m saying this ahead of time.

This is the part of the review where I go into what I LOVE about “The Canterbury Murders.” Let’s start with the big one, the story fits well in the three novels, and it is acceptable as a stand-alone. The series could end right here, no cliffhanger, no problems, and I’d be fine. Or, as I hope, with all my heart, the series could continue. That’s the best way to end a book in a series at any stage. There wasn’t some weird “Gotcha” moment either. It was concluded as a final ending, not a cliffhanger.

Next, I enjoy the research that E.M puts into her novels. I saw when Notre Dame went up in smoke, and my heart broke to bits. As a Catholic, I also understand the penance pieces, and I understand the eating fish bit and the “Lenten Thurst” which is mentioned. But what I didn’t know and what she filled in, especially in the author’s notes, were fantastic. I highly recommend that when you are done with the book, you read the author’s notes. It’s beneficial in understanding some context and who was honest and whom she imagined. The entire novel read so very well and was comfortable that I felt both real and fictionalized facts blended beautifully.

My next favorite part is the narrator, James Langton. He brings such a life and wealth of talent to this project. Barling and Stanton both have unique voices and hearts and souls, and I knew that in the text. But to hear them speak with authentic voices is so wonderful. The female characters were not watered down. They were given beautiful life as well. I loved his pacing, I loved his timing, and I loved that it didn’t sound like he needed a glass of water or was eating sand while he read. It was fantastic. Sometimes with some audiobooks I’ve heard in the past, it sounds like the narrator is sitting alone, staring at a glass of water outside of the room and trying to read through it. I can almost imagine the flawed individual pining for a drink but cannot until they read enough. That wasn’t the case here. It sounded natural to my ears, and it was terrific.

My very favorite part of this story was bringing in the subplot involving Stanton’s beloved former lover. I’m not giving spoilers! I just found that to bring that entire plot back in and explain why he was suffering so severely without her helped me know Hugo Stanton. I’m not sure if that was in her previous series or not, but I need to read it. I just truly adored the texture the subplot gave to the overall plot of this story. It made this story come alive in parts such as with the Herbalist’s nephew and explain grief on a better scale, and how people who grieve are willing to do anything to heal that pain. I know this pain. I empathize with it.

So! With all of this said, here is my review. “The Canterbury Murders” Receives five stars from me, with a score of 91. I highly recommend this book and the entire series. I hope you enjoy them as much as I do too!

I am looking forward to the next adventure of Stanton and Barling!

Thank you for reading my review, and have a fabulous week!