The Diver and the Lover – Jeremy Vine

By
Peter Donnelly
on

A novel of love, sacrifice and Salvador Dali, set against the backdrop of post civil war Catalonia. For fans of Victoria Hislop. It is 1951 and sisters Ginny and Meredith have travelled from England to Spain in order to help Meredith recover from a terrible trauma. They discover that the renowned artist Salvador Dali is staying in nearby Port Lligat. Meredith is fascinated by modern art, a legacy of her troubled past, and longs to meet the famous surrealist. Dali is embarking on an ambitious new work, but his model has refused to pose. A replacement is found, a young American waiter whom Ginny has begun to fall for. The lives of the characters become entangled as art, ego, loyalty and the heightened politics of Franco's Spain threaten to undo the fragile bonds that have been forged. A powerful story of love, sacrifice and the lengths we will go to for who - or what - we love. Based on the real events behind Salvador Dali's painting Christ of St John of the Cross.

Jeremy Vine is a popular host and commentator on BBC TV and radio, and The Diver and the Lover is his debut novel. It is a highly imaginative historical story based on the controversial painting by Salvador Dali, titled Christ of Saint John of the Cross. A fascinating premise that twists the recognised narrative behind the painting and the recognised Hollywood stuntman Russell Saunders used as Dali’s model being suspended from an overhead gantry to see how the body appeared being pulled under gravity.

“The crucified Christ was positioned exactly as she had imagined, the view from above the same as the sketch by Saint John of the Cross. But in Dali’s painting the Christ was so real that she believed for a second she could reach out and touch him.” 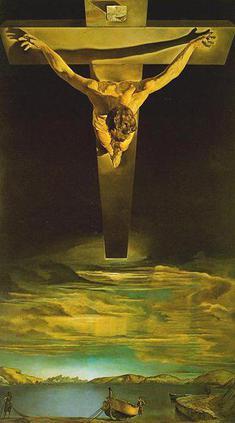 The painting came under criticism from the Church for viewing the crucified Christ from above, looking down from a position where no one should be placed higher than Jesus. The twist on the true story is that Adam a young diver manages to convince Russell Saunders to teach him to improve his diving skills, in return Adam will replace Russell as Salvador’s model hung from the gantry, without taking the credit. Adam meets Ginny and Meredith in Catalonia where most of the story takes place. Meredith and Ginny are half-sisters, united after discovering they shared the same father. Meredith is a unique and fascinating character developed from her early years with deep mental illness that often causes psychological trauma related blindness. She is such a fragile and endearing person, struggling to come to terms with the loss of her father, a youth spent in care and an asylum experience that she just managed to survive. The relationship between Meredith and Ginny reveals how delicate Meredith’s mental state is and how she has a fixation on art and particularly Salvador Dali. Ginny is a supportive sister who meets Adam on their trip to Spain and where they find a deep attraction towards each other. Love it its many guises is explored throughout the story, love in romantic relationships, love between family and friends, love of art, love of spiritual clarity, and the diver, Adam, seems to be the connection. A title of the book where the Lover may be many abstract things or simply just a person.

While the timeline covers various decades, it focuses mainly on 1951 during the Franco rule in Spain and the year Dali painted this famous painting. Dali is a known Franco supporter and with political factions seeking change, the characters are thrown into perilous events. The historical elements are well researched and delivered and the book offers an intriguing lens on the Franco and Dali situation that I didn’t know a lot about. There is a lot to appreciate in the book, but many interactions and choices felt unrealistic and jarring. It felt like a debut that still required work to improve the portrayal of relationships and certain situations. As the book progressed the style became more robust and paced much better, so I look forward to Jeremy’s next novel.

I would rate this book 3.5 stars and I would like to thank Hodder & Stoughton and NetGalley for providing me with a free ARC in return for an honest review. Out of interest the painting of Christ of Saint John of the Cross currently resides in the Kelvingrove Art Gallery and Museum, in Glasgow, Scotland.