The Emperor’s Trap by R.A Denny 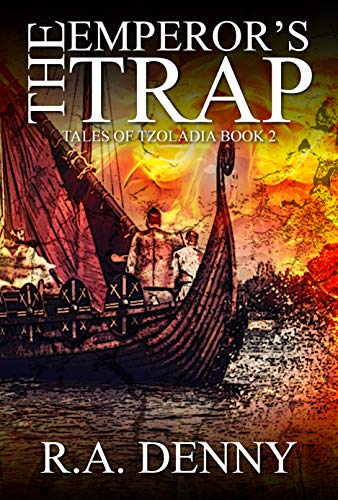 I can see the future, but it's muddy. A dream led me to Baskrod when I was a small boy. A dream showed me the emperor's mad ravings in his throne room. And a recurring dream reveals that I will ride a lion into the city of Tzoladia at the head of a victorious procession. But what if I'm wrong?

Let’s go into the first impressions. The start of this book was great because it did pick up where the last left off. So thankfully the mini-cliffhanger at the end of that book found it’s fulfillment and we have a better understanding of readers as to what is going to come for our friends.

We also have more of an insight on the betrayal to flyer protagonist and her group. The now captured set of fliers found themselves in quite the pickle at the end of book one, and through book two, they all are dealing with that situation. We see the dynamics between the flyers and also the people. We also see slavery, and we find monstrous acts are being done through the book in the name of one race over another.

Thus, for my first impression, I found this book an excellent start to the second part of a series. However, and this is very clear upon reading the opening pages, this book is not standalone. I’ll go more into it, but I realized upon opening it up, that this wasn’t a self encapsulated story to be read out of turn. You really must read the first book to understand what is going on with the second one.

And so I turn to my critique, and the first thing I’m going to critique is under the “Story Structure, Foundation, and Presentation” category. Let’s go with the presentation of the book on Kindle on default. This book is a tad of a mess on default settings, and it’s sometimes tough to read. Some pages are literal walls of unbreaking text, other times it’s broken up by dialogue, and it’s easier to read. There are no spaces between paragraphs, and rarely there is indenting.

I have the impression from the layout that the reason for that is the book was set up with physical book reading in mind with large paragraphs. Some of these paragraphs on a physical book would be reasonable, but on a small screen of a Kindle on the default settings with default fonts, this is painful. I’ve got new glasses recently; it’s the first time I had to swap out a pair of reading glasses in a while from my bifocals. So for my friends who are big on reading in chunks, be aware of this. Use your chapters wisely because of the setup, and you should be found to take eye breaks between the text deviations.

My second critique comes in the form of “Story Structure, Foundation, and Presentation,” specifically in story structure. Like the last book, we have some pacing issues. However, the pacing this time has more to do with the series than the actual book. “The Emperor’s Trap” is not a standalone book. Thus, the pacing has to match what is going on with the overarching story, and it doesn’t due to misses in some of the structure of ensemble fantasy tales. Our destined heroes who must do the big thing together, have had minimal if non-existent contact among themselves, and it makes the reader wonder when that will ever happen. Think upon Tolkin’s “Fellowship.” The group met to start with and broke up later. In this case, the group hasn’t met yet, and they are still broken up.

Additionally, there is a lot of speculation on parentage for characters, such as the cat rider, and continued ones for the main character, it takes time to flesh them out. In so fleshing these pieces out, we have added pacing issues because some of it is dry, and it makes the book drag. That makes it take longer to the reader to get from one story point to the next. This book is laid out in a three arch structure for this book, and it’s got a very long second act and minimal third act. That also adds to pacing issues. We know a lot from the first and second act, but the payoff at the end was another teaser for the next book.

Which takes me to my third critique, “Whole Story” and as I’m sure you all have guessed, this isn’t a self encapsulated the whole story on its own. Instead “Emperor’s Trap” is an excellent sequel, but it’s teasing the third, and it sets up foundational work for the third, but it’s not a whole complete story of itself. I’m not exactly upset about that; there are some books where you want to read to the second one.

As I mentioned the last time with “The Emperor’s Harvest,” .R.A. writes in a very similar style to Tolkien. That’s not an easy thing to do, she sets up this fascinating lore and foundational work as we go, and we the readers are taken to a new place, but like Tolkkin there is a necessitation to read everything in order. You can’t pick up “The Two Towers” and understand what is going on without having read “Fellowship” first. That’s the case here as well. So please be aware of this, make sure you read “The Emperor’s Harvest,’ and you understand the third book after “The Emperor’s Trap.”

Now with all of that in mind, let me go into what I loved about “The Emperor’s Trap” and to start, I’m going with “Story Structure, Foundation, and Presentation” and that has to do with the foundational work on the Point of View changes. The transitions from one character to another that .R.A. does is exceptional. It’s so seamless even though each character is in their place. It’s better than Soap Operas or Korean Drama’s do when they go from one character POV to another because in this case R.A. makes the tension follow into the next section. I have no idea how she does that, but it happened to me more than once. I was following along with a story about the market area for one character and found myself in the same tension where he was near said market character but having his problem. I liked the overlap.

Secondly, I want to rave about how perfectly done the spot editing was for “The Emperor’s Trap.” The punctuation, grammar, spelling, and margins are great. Aside from the paragraph issue above, I found nothing that was frustrating about the actual reading experience. I love when a book has excellent editing work, and I know that it was done well in this novel.

Next, in my list of praise, I found no “Cliche Much” situations, nor did I see any issues with “Lost in Translation.” This is a made-up world that R.A. has created; it makes sense to the reader if they are reading it chronologically. Though this is a densely written story, “The Emperor’s Trap” is deliciously presented to the reader, and it has exceptional intrigue. There is a lot of “Will they or won’t they” moments which I enjoyed. I love the “Sam and Diane” tension between the flyer and cat rider characters. I found that part of the plot to be my favorite and I’m not spoiling it for you guys, you have to read it. I found the chemistry of the main characters to their environment to be reasonable and realistic.

I also want to state how good this is for a ” the prophecy says so” trope as it is not your average story for such a trope. Yeah, there is a prophecy, it’s a huge deal, but it’s not uncomfortable. We get reminders about it frequently, but I never felt that it was being shoved down my throat for the sake of “pay attention to me” moments. I truly felt the realistic setting despite the fantasy nature of the story.

Lastly, I’m serious here, R.A. writes like Tolkien. That’s huge to me for a positive point. There is positive and negative to that style, but R.A. does well in this nature, and frankly, we need another Tolkin in the world. Now and again, the world needs to get lost in a story that is so unrealistic that we can find our real world more comfortable to live in.

Overall, this is an excellent story for a second outing, and it’s a well-done sequel in the series.

With all the math taken into consideration, I’m giving “The Emperor’s Trap” an 86/100 which is a Four Star Review on Amazon and Goodreads. If you want to read an exciting series with Tolkinesq elements and loads of rich lore, pick up R.A Denny’s “Tales of Tzoladia” and enjoy!