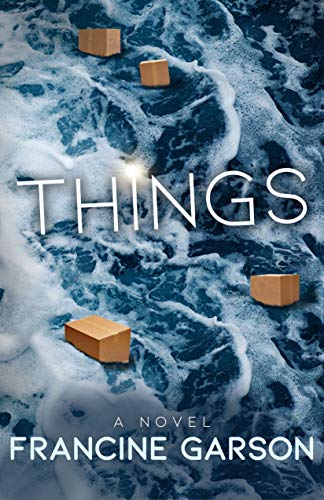 Jenny Gilbert is what you might call a hoarder, but she's a neat hoarder. She's a clean hoarder. And she's keeping it ALL a big secret.

To everyone who knows her, Jenny is a successful young college counselor. But secretly, she is also a collector, some may even say a hoarder. As a former military brat, she is on a mission to find and reacquire the many relics of her childhood that she was forced to leave behind with each of her family's moves, and she has rented a secret second apartment to accommodate her growing obsession.

When Jenny reconnects with Nick, a man from her past, a romance begins. But, as she tries to hide an increasingly complicated web of secrets from the man she's falling in love with, she becomes enmeshed in a messy tangle of omissions, half-truths, and lies. Then, when Hurricane Sandy adjusts its course, aiming itself directly at both of her apartments on the New Jersey shore, Jenny finds herself catapulted into a truly desperate situation.

At its heart, Things is the story of a young woman searching for a sense of rootedness, a sense of home. But, she needs to learn that amassing physical things is not the way to find it, and that what she seeks is not an external thing at all. Her quest is aided, as well as complicated, by Nick's arrival and the looming threat of the most destructive hurricane in New Jersey's history.

Francine Garson is a sweet person and a wonderful writer. Francine’s book is called “Things,” which she asked me to read for an honest review. I picked “Things” up on Kindle Unlimited, and this is my review. For the record, I read the book in one day.

Let me go into my first impressions here, and “Things” had my attention from moment one, on page one, on chapter one. The premise that the reader initially has is a unique one, and I don’t want to give spoilers. The protagonist purchases something that I do not believe anyone else would do, especially for the purposes in which it was purchased. I found this interesting, and I was hooked. The story dragged me into this fantastic world of intrigue.

The story goes into a detailed list of conditions that the protagonist might be suffering from. I’m not a psychiatrist, nor did I feel the need to look anything up, but I found the mental portion of the disorder to be unique. I haven’t really encountered a story like this before, and the uniqueness of the concept kept me going right up to the end of the novel.

For the next portion of the book, I am moving onto critiques, and I have only one. Unfortunately, for whatever reason, I was reading along and enjoying what had to be the final climactic scene of the book, and all of a sudden, it stopped mid-scene and sequence. That was it. There was nothing to the climax that had been building; there was no conclusion to the story; no end was given. I was left holding my book in disbelief as to what just happened, and all that remained was a sentence of dialogue that marked the end of the book. This was flabbergasting to me because of the progressive build of tension that was going to lead to an end and desperately needed to because of how intense it was, and yet there was nothing given because the book stopped.

My friends, I read this book in one single day. I was glued to it. Unable to extract myself from the confines of this story, my Kindle’s rubber cover still has a couple of marks on the side from where I had been gripping it while reading that day. To find no ending was disappointing, but perhaps there isn’t a strong enough word to describe how I felt. I thought at first maybe it didn’t download right. After checking four times, I found out that it did download correctly. That’s when I realized this was the chosen ending.

To my dearest friends who write books and work on their book babies regularly, please reconsider the ending if you are about to do this to the audience. If the argument as to why a writer would end the book like this, is “Ending a book mid-scene can get you in the next book and the series,” I know I’ve written about this subject multiple times, and most readers I know are rather strongly opposed to having their stories end with no end. If the argument as to why a writer would do that is “Ending a book mid-scene subverts your expectations, and that is in vogue right now, everyone is doing it,” my counter will remain some folks like that, but a lot do not. If you are a reader, please take my critique and weigh the options for your preferences.

Now onto what I enjoyed about “Things,” and the first is under the category of “Story Structure, Foundation, and Presentation.” For the grammar, spelling, story plots, tension, and pacing, the book was done well. It was easy to read on Kindle, and I had no trouble with any eye bending moments. I found it a comfortable read from page one to the last. This was a beautiful experience, and I wish that all books were as well done as this was with these categories.

Under the “Lost in Translation” category, nothing about what happened confused me. I never felt compelled to google or research anything. There was a well thought out and grounded story that made sense and never had any fourth wall breaking nonsense.

Concerning the “Cliche Much” category, I didn’t find anything that was cliche to me. This was a negative character arch structure that was done well and uniquely for the protagonist. The secondary characters made sense; there was a lot of original thought put into all of them, and I enjoyed it.

Overall, this story was fantastic until that last moment for me. I recommend it to anyone of any age, and I feel it is excellent. Again I only had one issue with the entire story, and for some, it might just be a moment to think about their own lives instead of how I took it. If you love stories that can be life-changing and give you another perspective, this is the book for you.

With that in mind, I’m giving “Things” a score of 80/100, which is a four-star review on Goodreads and Amazon.